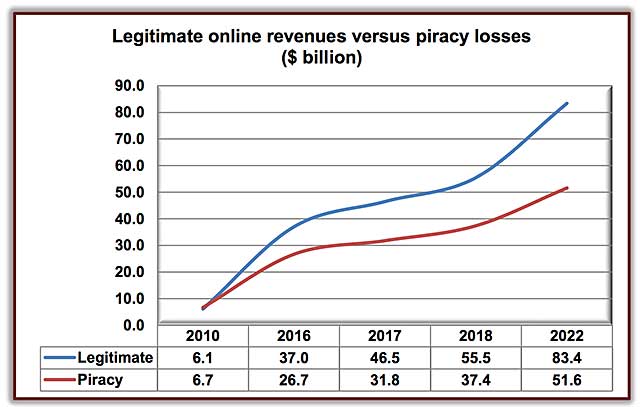 According to Digital TV Research, a London-based company that produces global media development reports for clients, worldwide revenue lost to streaming piracy could reach almost $52 billion by 2022. These figures reflect how lost revenue grew from $6.7 billion in 2010 to $31.8 billion last year, and don’t include sports!

Although these figures sound alarming, there are signs that piracy is slowing, and the gap between legitimate streaming revenue and losses to piracy is getting bigger. This is tough to accept when piracy losses figures grow larger, but Digital TV Research insists that its growth rate is declining, probably not least due to increasing government enforcement in some countries, and the increasing options for consumers to access affordable legal streaming in others on a much wider scale.

The reality of the figures, however, are clearly demonstrating a soaring rise in the collection of legitimate revenue since 2010, when the figure was $6.1 billion. Last year the figure was $46.5 billion and is predicted to reach $83.4 billion by 2022. Legitimate streaming revenues did not overtake piracy losses until 2013.

The biggest revenue losses to piracy currently occur in the US, but it is thought that this year will see the Asia Pacific region take that title with snowballing losses that could reach $20 billion by 2022, doubling its current figure. Currently the US is followed by China, Brazil, the U.K. and South Korea respectively, forming the ‘top five’ countries for piracy loss. The latest research suggests that India (currently 8th) may reach the top three with predicted losses of more than $3 billion by 2022.